We're getting a lot of spam signups so I changed things a little.

This is sad news that you probably never knew about before. Bob Andersen was the British Olympic contender in 1952 for fencing and either instructed or did the stunts in the first few Star Wars movies, and the Lord of the Rings.

Even if you didn't know…

Learn more about the parts of the sword -- NCJSC site

I came across the Northern Carlifornia Japanese Sword club (token kai) formed by the renown author of The Samurai Sword -- A Handbook, Jon Yumoto. I noticed in particular how detailed their Visual Glossary is. This is a great resource if you want to know more about the different aspects of the sword, its, manufacture, the different types of design of both the blade and the mountings.

Apologies on being away

I've been awfully busy for quite some time, and I will try to keep adding content more regularly. Apologies to the folks who were interested in becoming members as well. I get so many spam members its hard to tell sometimes, which is why I put in the approval process.

So far this new type of goshinken has held up pretty well. It's only been a month of use but so far nothing immediate.

We've tried it among the senseis and brown belts and it certainly held up. The entire class has used it (swapping it between people) for sparring and kata practice. They're getting used to others using it on them.

The grip is holding. Even with very hard smacks the is no paint chipping, cracks,… These are the almost visually realistic looking foam swords created by the SCA types (the Renaissance renactment folk) and LARPers (Live Action Role Playing). There's quite an industry growing around these incidentally, judging by the…

Ning is planning to start charging for this site. Till now it's been free but I'll have to consider it. The very basic one has too few features but enough to put our photos. The video space is limited.

On the other hand Facebook technically owns any picture you put on it which I don't like either.

Sorry for not getting that Spam earlier

A bunch of spambots /users joined and I deleted their "online prescription" stuff. Sorry about that.

Here is Taisabaki #3, with a drawing of foot positions before and… Continue

It took a good hour or so to do the testing but it seemed to go pretty quickly for me. It seems to take forever of waiting and then take a long time to do your own test, but in reality time passes pretty quickly. There's also the nervousness factor. It makes you forget what… Continue

For advanced cutters, such as those who have been shodan for a while in our class, I think a standing target is becoming too easy. Yes, there are certainly still many possible cuts that you and I can't do yet on a target that is in a fixed location. But there is a whole domain of cutting that requires a different set of skills that we don't practice as often.

If you've been to our cutting sessions, you may notice at the end of class, we sometimes toss the last small cutable pieces at… Continue

The best I saw today was Alex who is a yonkyu but was able to do a full (and nice) kihon-toho on a half goza. That's usually a nikkyu level cut. Charlie injured his palms and wasn't able to cut before they started… Continue

It might have just been an off-day for folks but from what I saw last weekend, all the candidates for the next black belt level, myself included, do not seem ready for their next test. As cutting criteria again, you need to be proficient in those cuts, which to me means you should be able to do it not just once or twice but pretty much on command 60-90% of the time.

You should not have to think through the cuts but you can certainly do it at a careful pace (slow in between cuts). The… Continue

I purchased some sharpening stones from Nihonzashi to try out. They have a fairly large selection of stones from 100 to 8000 grit. This is based on the Japanese grit system, and all the stones are from Japan I believe. I only purchased a 1000/6000 combo stone, and a 3000 grit one, which are better for maintenance not hard core repair. The Japanese grit system is not the same as the US one (quite different actually). There is a conversion chart that I saw somewhere but you will need to be… Continue

I'm considering another cutting day on Sat the 24th starting around 9am at Himmel park. It usually goes on till noon. I need responses from people on who can attend and how much goza you need.

We have goza again. As before goza is $6 for a full piece/ $3 for half piece. I plan to cut about 9 goza myself and may have students from the high school class too, so I simply can't soak it all and bring it all in my car. (one plastic tub only fits about 16 before it breaks). For Andrew C and… Continue

I have the new Peg sharpener in and have been making some pegs. Basically, it's cheaper in the long run than buying pre-made pegs for our cutting stand. I went out to Home Depot, got four 1" dowels and had them cut down to size, so now we have 16 possible pegs. 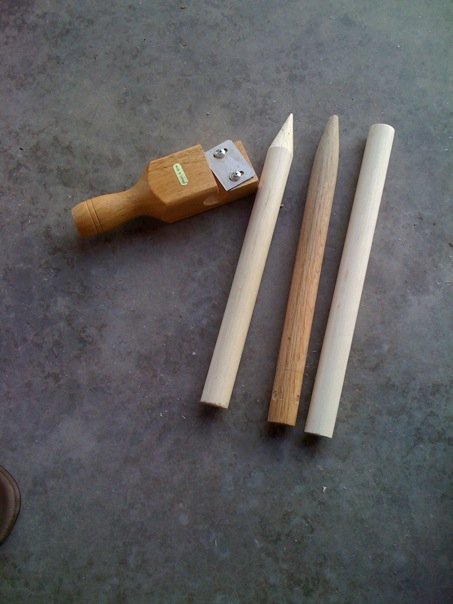 It works like a big pencil sharpener essentially. Blank peg goes in one end and you turn while it planes away the edge. It took me about 15 minutes to do one peg and made my… Continue

Myth: That "Zing!" sound when you draw

Another myth from many movies: Swords should make "Zing!" sound when you draw them from the sheath.

Perhaps for other swords, but this is generally a bad idea for Japanese swords.

First, most, perhaps all, sayas are made from wood (or wood on the inside). Some have metal or horn fittings at the koiguchi (the opening entry point for the sword), but that is mostly or entirely on the outside. So there is not really any other metal on the inside to make that metallic… Continue

Myth: sharpening stone inside the saya

I was asked about this the other day:

I do not have a definitive answer to this but I think it highly unlikely that people would line the inside of their saya (sheath) to let them sharpen the sword every time they draw it. It's one of those movie ideas: cool in theory, terrible in practice.

Sharpening a sword is not a something you can just run once quickly across the nagasa (length of the open blade) to get any significant benefit.

As you can see from the recent videos, I've been testing out the new high-speed Casio EX-FH20 camera to record some of the activity. It takes high-speed video at 210 frames per second. This really is helpful for cutting to see what we've done.

One problem however is that the files are huge, and on this site each video can only be 100MB maximum, although we can have as many of them as we wish. Even a minute of highspeed film is 60MB. From Saturday's cutting session, I have an hour or… Continue