That tonfa/sword guy in Hellboy I

In the first Hellboy movie, there was a villain who used a pair of swords held like a tonfa. If you haven't seen a tonfa, it is very much like a modern police baton: a stick slightly longer than an arm, with a perpendicular handle about a quarter of the way from on end.


A tonfa and police baton: 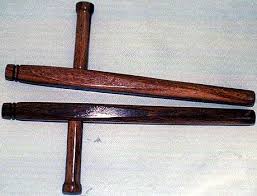 Anyway, Hellboy was on TV again because the new movie is out, and I was watching how this character was fighting with his bladed weapon. Their tonfa-sword was basically a two-edged blade along the shaft with points on both ends, and held at the perpendicular grip.

It is mostly like tonfa-fighting techniques with some elements unique to bladed and pointed edges. As a blade, it is mostly a slicing or stabbing weapon, rather than a slaying (i.e. cutting through entirely) one. Tonfa's have two ranges depending on which end is pointing forward: the knife/dagger range, and the shortsword range.

The techniques are very different from katana fighting in terms of blocks and grip, but similar in terms of kesa, kiriage and suihei, one-handed. It is definitely the hammer-grip, rather than the gun-grip as we do. Blocks however are like tonfa blocks, or reversed-grip ninja-to fighting (holding tsuka with kashira pointing forward, and kissaki near your elbow).

The nice part is that you can switch range from knife- to shortsword-range by flipping the longer end forward. That flip works well for solid sided tonfas as blows to soft-spots, but with the flat sides of a sword, it probably doesn't have the mass to hurt as much. The edge doesn't even come into play.

I'll have to see what cool weapons come out in Hellboy II.