I'm currently looking into where we can get a new tameshigiri/cutting stand.

Replies to This Discussion

Permalink Reply by rawnshah on September 21, 2007 at 2:01pm
So far the best I've come across are from Woodall's Custom Workshop.

I've sent them a note asking about multi-peg stands. While they list them, they have said they need to try something else than the 3-peg adapter they have. 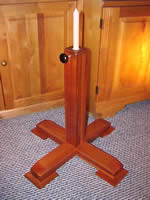 Permalink Reply by rawnshah on October 17, 2007 at 11:58am
Here's your chance to comment or vote on the new stand.

I've been talking to Bill Woodall's shop to come up with a 5-peg stand. What we have is called a yokonarabi stand, where there are two legs, and a bar between them with the peg holes. Each of the legs can also be used as a 1-goza stand too.

There are three possibilities in the image below. First thing to note is that with 4.5" of space from the side of one peg to the next, the distance seems "right" for spacing between goza (about 1.5"). 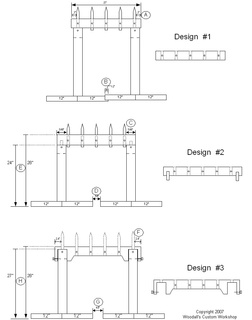 However, in Figure 1, you can see that the feet of each overlap which we can't have.

Figure 2 also works but it seems to me unnecessary to have extra holes. Also the distance from peg to end of stand further apart; there is a tiny chance that students will end up cutting into the stand.

Figure 3, nice idea but Shihan and I think the thin section that fits over the leg would break apart easily if it got cut into.

Shihan and I agreed that Figure 1 is still best, so perhaps 5" spacing between pegs would be nice. However, when I drew up a scale model, the goza just seemed just a little too far apart; this would make cutting 5 targets require a much wide cut trajectory. The wider apart they are the less impact force, but the wider the swing.


What do you think?

If all goes well, we should have the new combo stand by mid- or late-November. That should be enough time for one or two cutting sessions on this stand. For those who are trying multiple goza, this will be a whole new experience.

Since this is a combo stand, this also means we now split it into two stands for tameshigiri, and have a total of three stands if you also include Shihan's, so practice might actually go a whole lot faster with two people practicing (separately).

We may have a final cutting day this year before the actual test date if so.

Permalink Reply by rawnshah on December 12, 2007 at 8:25am
We finally did some tameshigiri on the kiridai (stand).

Shihan pointed out that when used in 1peg configuration, the 4" spacer blocks that make up the full 28" height that we are used to, the block is free to rotate which may make the goza unstable. After trying a number of cuts on them, they do turn a little but the weight of the goza generally keeps the block in place. I think for a design improvement, we need to have perhaps a "tooth" or key (a bit of extra cut out of wood, that keeps the top piece locked into the lower one. Or another approach may be to have a whole with a locking screw just like the stand.

They were very stable, but we used this indoors on flat carpeted ground, so it wasn't really going anywhere.

When put together, I did cut 2 goza and it generally felt easier. Since I only did it once, it's not easy to tell apart really. Once my shoulders feel better, I'll try cutting three on this, probably in January.

The pegs are much longer than we are used to, as well as more spiky. We have been putting a rubber band in place on the goza over where the tip should be and telling people not to cut below that. However, even while trying to be careful, we did get one of the new pegs cut into already.

There are actually three different lengths of pegs with this stand. The longest one goes into the legs through the 4" blocks. The second longer ones go into the yokonarabi piece; so when put together in 5 peg version, they are all the same height. The smallest ones are for the legs when not using the 4" spacers.

Looks like I'll have to order and keep a bunch of pegs in stock. I've tried making them before with my dremmel but it is just a pain without a real sander/lathe.

All in all, so far, it is not just pretty, it seems to work as well as or better than we hoped.